The Vigor2862 LTE series router has most of the functions of the Vigor2862 series routers, plus a slot for a 4G LTE mobile broadband SIM card. The supported SIM cards include those from the major broadband service providers in Australia (Telstra, Optus, Vodafone, etc.), as well as those in New Zealand (Spark, 2Degrees and Vodafone) with speeds up to 150Mbps downstream and 50Mbps upstream.

In addition to the 4G LTE mobile broadband, the Vigor2862L series router has other WAN interfaces including 1 x VDSL2/ADSL2+, 1 x Gigabit Ethernet WAN and 1 x USB port for a 3G/4G mobile dongle. With the latest Wi-Fi WAN feature, you can configure WAN2 to use the router Wi-Fi to connect to an external Wi-Fi hotspot.

The Vigor2862 LTE series router can connect to the Internet through any of these interfaces, or with a combination of interfaces for Load Balance and Failover functions. Like the Vigor2862 series, this router supports business features including an object-oriented SPI (Stateful Packet Inspection) firewall, IPv6, 32 x VPN tunnels (including 16 x SSL VPN tunnels), tag-based VLAN, multiple subnets, etc.

For mission critical applications, the Vigor2862 LTE series router can be used in High Availability mode to provide uninterrupted network connectivity, if there is a hardware failure occurrence in the primary router.

The LTE feature makes the Vigor2862 LTE series router an ideal solution for applications such as:

The Vigor2862 LTE series router can be rack mounted using a 1RU rack mount bracket on a standard 19” rack or cabinet.

The Vigor2862L series router has a SIM card slot for a FDD/TDD LTE/4G category 4 mobile broadband modem. The 4G/LTE SIM card slot allows you to insert a SIM card from your service provider and have Internet access without the need to use additional hardware. It is protected by a cover.

The Vigor2862L series router has 2 LTE antennas. A 1 metre extension lead with a magnetic base allows the antennas to be placed in the best position for optimum 3G/4G reception. 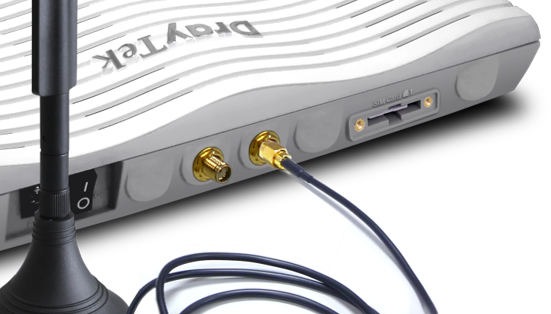 The SMS feature allows status and alerts to be sent by the router, or an IT admin can reboot or configure the router with a pre-configured host.

The Vigor2862 LTE series router supports 4 types of WAN Interfaces, including an ADSL2+/VDSL2 WAN interface, a configurable GbE WAN/LAN port, a USB port for a supported USB 3G/4G USB modem, and a card slot for LTE 4G/LTE modem. Additionally the Wi-Fi WAN can be tethered to a Wi-Fi hotspot such as a 4G Wi-Fi modem for Internet access.

3G/4G mobile broadband access can be achieved through either a SIM card in the 4G LTE SIM card slot, or a USB dongle in the 3G/4G USB port.

With between 2 to 4 WAN interfaces connected, you can configure for Load Balancing or Failover. For example, you can use WAN 1 as your primary Internet connection and have a failover connection over a 4G LTE connection.

The Vigor2862 LTE series router supports both port-based and 802.1q tagged VLANs. Port based VLANs allow the assignment of a VLAN and IP subnet to each router LAN port. On the other hand, 802.1q tagged VLANs can extend up to 8 VLANs and the IP subnets to an attached switch.

The Hotspot Web-portal (log-in) provides four profiles to allow guest users to log in to the wireless network by using their social account (Facebook or Google) use a PIN code issued via SMS.

8 x SSID’s are available (4 for the 2.4GHz band and 4 for the 5GHz band). Each of the SSIDs can be created and assigned to a VLAN and IP subnet with separate security levels. The wireless VLAN function lets you isolate wireless clients from each other or from the “wired” LAN.

With WPS (Wi-Fi Protected Setup) feature, you can press the WPS button at the front of the router to pass on the security keys to a client PC in the LAN, allowing for easy and secured access to the Wireless LAN.

QoS functions allow the network administrator to set priorities for certain types of traffic to guarantee the required level of performance for data flow. For example, real-time traffic such as VoIP or Video over IP can be prioritised as these have less tolerance over delays caused by network congestion.

The traffic type can be assigned to each of the three QoS classes and reserved bandwidth allocated.

Stateful Packet Inspection (SPI) Firewall monitors incoming and outgoing packets at layer 3 (OSI model) and passes or blocks the data packets based on the configuration.

The DoS feature protects the network for unwanted access requests from DoS attackers.

WCF classifies all websites into 64 categories, and allows network administrators to select categories to protect the users from undesirable website content. DrayTek uses the CYREN WCF database for its Vigor routers, and each router includes a free 30-day trial license.

The object-based firewall provides flexibility by using Objects in the firewall settings. Objects can be created and placed in groups for IP, service type, keyword, file extension, etc. This allows a filter rule to be applied to many IP addresses, reducing number of firewall filters required. In addition, these objects and groups can be reused for other firewall settings resulting in reduced amount of work required to create multiple firewall rules.

The Vigor2862 LTE series supports up to 32 simultaneous VPN tunnels, of major protocols such as IPSec/PPTP/L2TP, including 16 SSL VPN tunnels protocol. The dedicated VPN co-processor supports the hardware encryption of AES/DES/3DES, hardware key hash of SHA-1/MD5, and LDAP authentication, and ensures that VPN traffic is secure and performance is maximised.

The SSL technology allows secure Web encryption such as those used for on-line banking. With the Vigor2862 LTE series router, you can create SSL VPN in Full Tunnel mode or Proxy mode.

Furthermore, since the Vigor2862 LTE series router supports multiple WANS Ethernet and 3G/4G, you can create VPN Trunking for VPN Load Balance and VPN Backup. For instance, you can use a number of connections to a site to increase the bandwidth, or have a backup connection when the primary connection fails.

Instead of normal method for VPN connection through web browsers, Vigor2862 LTE series supports Central VPN Management (CVM) which utilises TR-069 protocol. You can create VPN tunnels with just a few mouse clicks on the icons representing your local network (e.g. public places such as a café) and remote locations (e.g. branch or home office), and the router will establish the connection automatically. This takes away the tedious process required for VPN tunnel creation.

As well as simplifying creation of VPN tunnels, CVM also provide a console to monitor multiple CPE devices and VPN tunnels. This includes displaying the CPE devices on a Google Map.

Other features include scheduling of CPE configuration backup/restore tasks as well as scheduled firmware upgrade of the CPE devices. Up to 8 DrayTek CPE devices are supported.

The Dashboard feature displays the status such as traffic and number of attached stations, of all the attached Access Points.

With Auto Provisioning enabled on the attached Access Points, WLAN profiles can be created and applied to the selected Access Points from the central console.

The AP Maintenance feature allows a number of actions to be programmed, including Configuration Backup and Restore, Firmware Upgrade, Remote Reboot and Factory Reset, for selected Access Points.

Central Switch Management provides a convenient and easy way to manage and configure supported VigorSwitches.  Switched networks comprising VigorSwitches can be easily deployed from a single console. With a few mouse clicks in the graphical user interface, VLANs can be assigned to the switch ports and at the same time update the router configuration. This includes the creation of 802.1q trunk ports.

Another feature is the backup and restore of switch configurations. You can also reboot the switch or reset the switch to factory default settings

The Switch Status menu provides, at a glance, the status of all the attached switches. You can see the switch name, its IP address, the model number and system up time, how many ports are in use in each switch, port status, how many clients are connected, etc.

The Vigor2862 LTE series router includes a number of management options to provide both local and remote access to monitor and manage the router.

The TR-069 feature integrates with the VigorACS 2 centralised management system. This can be used to allow system integrators or network administrators to configure, monitor and manage the Vigor2862L remotely from the comfort of their offices or homes. It can also be used to Auto-Provision the Vigor2862L remotely by sending configuration data to the router. There are 3 wizards: Configuration Wizard, VPN Wizard and Firmware Upgrade Wizard. These allow network administrators to quickly and easily carry out complex tasks.

Alarm & Log Management features ensure real time notifications and alerts to specified phone numbers or email accounts in relation to any faults or issues of the connected CPEs.

A number of diagnostic functions are also available for the network administrator to monitor and troubleshoot any network issues. These include Data Flow Monitor, Traffic Graph and Syslog Explorer, etc.

High Availability mode in the Vigor2862 LTE series router provides hardware redundancy in the network by the use of one or more Vigor2862 LTE series routers in a group that can be configured for Hot-Standby or Active-Standby. High Availability is essential in mission critical applications where the network as well as Internet connectivity needs to be available 100% of the time. Should a hardware failure occur in the primary router, the standby router will immediately come on line to provide uninterrupted network connectivity.

DrayTek 4G LTE routers, including the Vigor2862 LTE series and Vigor2926 LTE series, have all the features you need for a network in a small to medium size business. Each of these routers has an integrated LTE modem and accepts a SIM card from any of the major broadband service providers in Australia (Telstra, Optus, Vodafone, etc.), as well as those in New Zealand (Spark, 2Degrees and Vodafone). Speeds up to 150Mbps downstream and 50Mbps upstream are supported. What’s more, each of the wireless models, Vigor2862Lac and Vigor2926Lac, has a built-in 802.11ac wireless access point.

Provision of Internet services for tourist bus or coach passengers

One ideal application of either the Vigor2862Lac or Vigor2926Lac routers is to provide internet access for passen-gers on public transport such as tourist bus or coach. For the transport company to provide free Wi-Fi access for its passengers, the wireless router can be placed in a suitable location on the bus to provide good Wi-Fi coverage throughout the bus. On larger busses or double decked busses, you can install a Wi-Fi access point such as the VigorAP 902 to extend the Wi-Fi coverage.

The passengers can be given unrestricted access to the internet, or the User Management feature in the router can be used to issue usernames and passwords for the passengers to prevent unauthorised users outside the bus from getting free internet access. In addition, users can be directed to the company web portal for information on the services. Other security measures that can be implemented are the use of the firewall and Content Security Man-agement (CSM) to protect the users from undesirable website contents (eg. for under ag